We have a cat. My lovely supermodel wife calls her a kit-ten, which I think is so darlingpreshadorbs I can hardly stand it. Especially since our kit-ten is eighteen years old, and is about as far from being a kitten as a cat can be.

Her name is Samantha Rachel Markes-Covington Rowen. Yeah, I adopted the cat as my own, much like I adopted her original owner, Abigail Marjorie Markes-Covington. Actually, three of the last four cats living in our household were Abi’s cats.

Abi moved in with us when she turned eighteen, much like her older sister had. Gwen had just moved out of our house, making room for Abi’s arrival. Abi had two Himalayan cats at the time, Boots and Sheila, and she asked if she could bring her cats with her when she moved in.

I wasn’t a cat fan, but once I fell in love with Lea’s daughters, I’ve discovered the hardest thing for me to do was say No to them. For almost any reason. I could tell stories about how those girls have me wrapped around their fingers, but I won’t. I have to try preserve what little dignity I have.

So, Abi and her cats moved in with one proviso–the cats had to stay in the basement. I even built a cat barrier to keep them contained to the nether regions of the house. But they were cats, they jumped over it, and laughed at me. I can’t remember how long my edict lasted, save that it didn’t last long.

The cats roamed wherever they pleased. I did my best to herd them back into the basement when I found them brazenly strolling around upstairs, and at least they slept in the basement with Abi. I had to content myself with that pyrric victory.

Then Sheila became ill, and had to be put down, and we were down to one cat.

“I don’t think we should leave Boots in the basement.” my wife said to me one day. “She’s all alone, and I’m sure she misses her daughter.”

Boots had been Sheila’s mom.

I had never been married prior to marrying Lea, but one of the first things I learned as a married guy was it was futile to argue with my wife about almost anything. I don’t think I’ve ever won an argument with her, even when I knew I was right. By the time she got to her closing rebuttal, I was dead in the water.

I still don’t understand how she does that. I only know she does it, all the time. So, when she said she didn’t want any lonely cats in our house, I knew the best outcome I could hope for was a delaying action until I was overrun.

Boots was given total access to any part of the house she wanted to be in, including our bed. And Lea was so thrilled the first time Boots jumped onto our bed to sleep with her! Then this happened:

“Honey, could you get out of bed?”

“I have to go to the bathroom, and I don’t want to disturb the cat.”

I didn’t argue. I got out of bed, and waited for my wife to return before I got back into bed. And that’s when I realized who the Boss was in my house, and it wasn’t me. The person that wore the pants in my house wasn’t a person, nor did she even wear pants.

Boots was an elderly cat when she moved in with us, and her health wasn’t the best. She eventually also had to be put down. It was a sad day for the two women living in my house.

But life goes on. I was perfectly content living without a cat. And Lea seemed to be okay with that arrangement, too. Then one day about six months after Boots had passed, Lea looked at me with a certain look in her eyes, and said,

And I knew I was doomed. There would be kit-tens.

Lea wanted an Himalayan. She found a breeder and made arrangements to pick up Alison Marie, Ali, for short. Lea wanted an Ali cat.

Abi went to the Humane Society. She perused the glass display case that contained a pile of kittens, like a million kittens. At the very bottom of the pile, a small gray and white feline face made eye contact with Abi, and said, “Mew!”

And Abi’s heart melted. She named her kit-ten Samantha Rachel because, “…she kind of looks like a Rachel, but not a Rachel Rachel…” Or something along that line of logic.

I have to admit, Ali and Sam were as cute as, well, kittens. They were fluff balls of manic energy, and their antics were hilarious. The kittens were best buds, and life was good.

And then they grew up and became cats, and everything seemed to change.

Alison was a purebred Himalayan, born to be a queen. It was no longer seemly for her to be seen with the mixed breed street urchin that had been her childhood best friend. Sam was part domestic tabby, part Maine Coon cat.

And Ali let Sam know it.

Their personalities went through a profound change. When the doorbell rang, Ali would answer the door because why else would anyone come to our door, if not to see her? Sam would run and hide.

Ali made friends with our neighbors, and would go next door to hang out with Donna while she worked in her gardens. Sam would hide in the hostas I planted for Lea because Lea wanted gardens, but she didn’t want to actually do any gardening. Sam became an expert at playing hide and seek.

As long as Sam was content to let Ali rule the roost, everything was fine. And Sam seemed to be content with that arrangement most of the time. However, Sam seemed to crave affection far more than Ali did. Ali seemed content to be worshipped from afar, unless Sam received more affection than she did.

Poor Sam. She couldn’t win when it came to her stepsister, and then karma stepped in and evened the score. Alison got sick, and then she got really sick, and just like that, she was gone.

That was a sad day, even for me. I told Lea she could never tell anyone, but I cried when Alison died.

And just like that, Samantha became the only cat in our house.

I’m sure cats are capable of feeling grief and loss. I doubt Sam had much reason to grieve Ali’s passing, but every now and then she will let loose an yowl that sounds like a howl of mourning. It’s possible she’s still grieving the loss of her childhood companion…

But beyond that, Sam doesn’t appear to miss Alison at all. And I can’t blame her for that. Sam eventually realized she no longer had to play specond fiddle to anyone, and she has become without a doubt, the coolest cat I’ve ever known.

When Abi decided it was time for her to leave the nest and make it on her own, she had to make a hard decision. As much as Lea and I had grown attached to Samantha, Abi was Sam’s mom.

“I have a favor to ask you.” Abi said to me one day. She had made her hard decision. “I think Sam would do better if she stayed here with you. Would you adopt my cat and take care of her for me?”

Like I would’ve been able to say no to her.

As it turned out, Abi should have told Samantha I was going to be her dad because Sam had already decided whom she was going to devote her affection upon. And it wasn’t me.

One of the traits of Maine Coon cats is they adopt one person, and they are completely devoted to that person. In Sam’s case, she decided to adopt Lea, and there was no question about where her loyalties lay.

As in most cases with my lovely supermodel wife, I became the guy that everyone remembers in association with her. Sam never viewed me as her dad. I was guy with the Nice Lady. My purpose was to clean out her litter box. I’m sure she appreciates that in her way, but she lives for Lea.

Sam learned to accept me as a Lea substitute whenever Lea had to travel for work. But she forgot all about me the moment Lea returned home. Sam would run to her the moment she walked in the door, and meow and prance and purr, and follow Lea around like a puppy. It was actually very cute.

Business travel is a thing of the past for Lea nowadays, so Sam doesn’t have to miss her person for more than an hour or two at the most. Sam doesn’t follow her like a puppy anymore. She’s an old cat, and spends most of the day sleeping on the couch next to Lea. 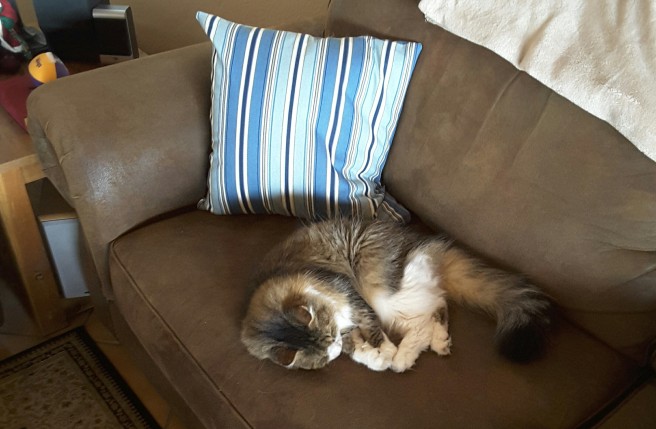 I think I can count the number of times I’ve sat on my couch in Mexico on one hand. I no longer question my position in the hierarchy of my household. In fact, when we decided to retire this year, Lea decided she would fly to Mexico with Sam, first class, to decrease the amount of travel stress Sam would have to endure.

I agreed without an argument. Lea’s love of her kit-ten has infiltrated my psyche. Whatever Lea wants, as far as Sam is concerned, is fine by me.

I have grown accustomed to having a cat tell me what to do. Like, when to get up in the morning to feed her. And when to let her outside so she can explore the backyard. Or when she wants to lifted onto the couch. She can jump on it any time she wants, but it’s better when I place her there. Or when she wants more food. She used to tell me when to go to bed, but since she’s retired, she tends to sleep on the couch longer before she comes to bed. I even bought a set of pet stairs for her so she can get on the bed. She can’t jump that high anymore.

It really is hell getting old.

I hope Sam’s health will allow her hang around and tell me what to do for a couple more years. I’m going to miss her when she’s gone. And Lea will be devastated.

But maybe six months down the road after Sam’s gone, it’ll be my turn. I’m going to give my wife a certain look and say,